Somehow, nearly a month has come and gone since my last post. I realize I’ve been remiss in regaling you with tales of Japan’s culinary delights, but I hope you understand, given the circumstances. After the earthquake, when thousands were subsisting on instant noodles and rice balls, writing about food seemed inappropriate, even impossible. For a few days, I subsisted on simple meals – simmered chicken and kabocha squash, egg salad on toast, rice with pickles – but even these healthy, comforting dishes were difficult to enjoy. Amid the shock and stress, my appetite and will to cook (much less photograph and write about food) simply disappeared.

Thankfully, over the past several weeks my capacity to enjoy the small pleasures of daily life – a picnic with friends, the first whiff of early spring’s bracing breath, a satin blue sky against tufts of sakura – has returned, albeit in fits and starts. When I returned to Japan almost two weeks ago, I found myself craving one thing: soba, particularly Shinshū soba, a rustic variety from Nagano prefecture. Whenever I’m feeling under the weather, both physically and mentally, nothing revives me more than soba, preferably accompanied by plenty of sprightly scallions and sansai (mountain vegetables). It’s nourishment embodied, as sustaining as chicken noodle soup but, to my peculiarly un-American taste buds, infinitely tastier.

So, after battling jet lag at work for a few days, I hopped on the shinkansen and made my way to Ueda, where I met Steven for lunch at one of his favorite soba shops, Kusabue (草笛). 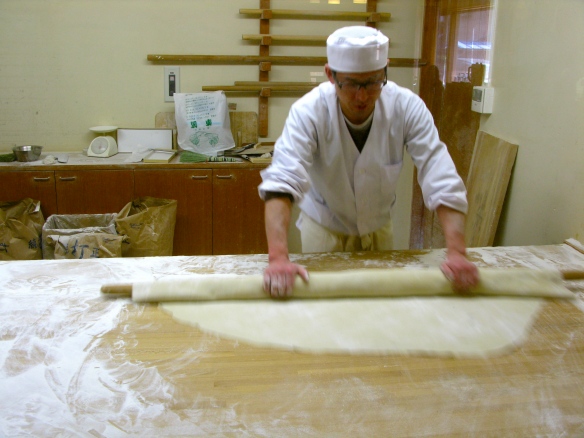 As at most soba shops in Japan, customers at Kusabue are given a choice of either hot or cold noodles. The former, of course, are served in a bowl with steaming broth, but the latter may be served either zaru style (heaped on a bamboo mat, as seen below) or mori style (in a shallow bowl), with a small vessel of soba tsuyu (dipping sauce) on the side. The tsuyu is poured into a small cup and mixed to one’s taste with a variety of condiments, usually thinly sliced leek, grated daikon, and wasabi. (Nagano prefecture is famous for its wasabi, so soba shops there often serve bit of the freshly grated root alongside their cold noodles.)

It was a warm day, so I opted for the zaru soba along with an assortment of tempura (kabocha, maitake, sweet potato, green pepper, eggplant, and kamaboko), which was served with its own dipping sauce, or tentsuyu. The handmade noodles were fantastic – full of chew, with enough body to hold their own against the pungent condiments – but the tempura was somewhat heavy and a bit of a distraction from the main event. 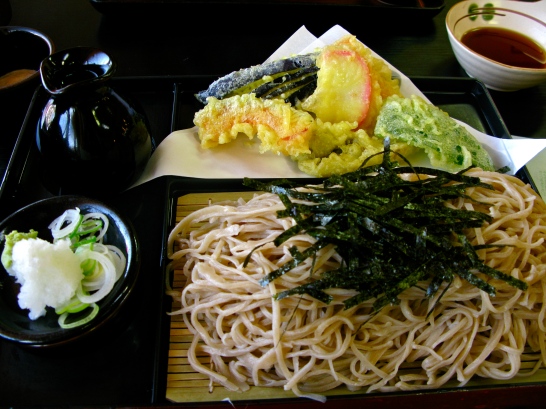 Steven, however, rightly ordered the house specialty: cold noodles served with a dipping sauce made from tsuyu and locally-grown, ground walnuts (kurumi). The walnuts lend the otherwise thin tsuyu body and richness, while their pleasingly nubby texture makes slurping the noodles even more enjoyable. It’s an unusual dish, one you’re not likely to find at Japanese restaurants abroad, but it couldn’t be easier to make at home. What follows is certainly not a recipe, but one is also not really necessary for a dish as simple as this. If you have any questions, feel free to ask them in the comments!

A couple notes on ingredients:

– Fresh noodles are of course preferable for this dish, though dried ones may also be used. If you do go for dried noodles, I’d recommend using a Japanese brand, such as these, which have become my go-to variety in Japan.

– Although American walnuts are somewhat more bitter than their Japanese counterparts, there’s no reason you can’t use them here. Other nuts – perhaps almonds, pine nuts, or pistachios – would make interesting and equally tasty substitutions.

– If you’d rather not make the soba tsuyu from scratch, you can also use store-bought mentsuyu (noodle sauce), which is available at many Asian markets.

Cook the soba according to the package directions, drain, and rinse well. Pile the soba onto wide plates (or zaru, if you have them), and pour the tsuyu into small bowls or teacups. Mix a few tablespoons of ground walnuts into each dish of tsuyu, add condiments to taste, and dip away!

4 thoughts on “A Return, and Kusabue Soba”