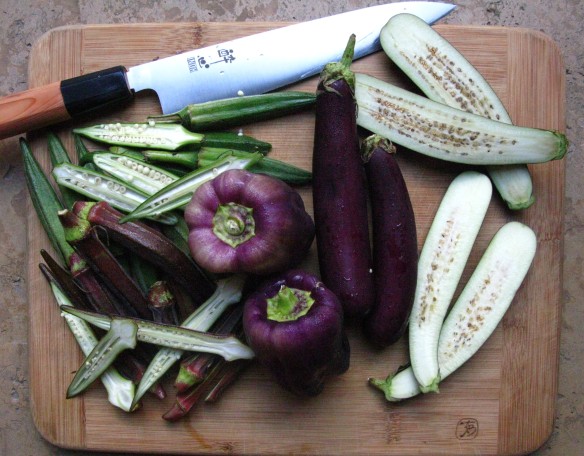 Readers, I’ve missed you so! Summer has officially passed, and so far all I’ve managed to write about is frozen sweets. Rest assured, my love of vegetables has not waned in the slightest, but I’ve found myself short on time to cook them in new and interesting ways. This recipe, however, is an exception. The inspiration for this dish came by way of a small restaurant in Matsumoto called Dengaku Kiso-ya. Housed in a traditional wooden building just a few paces from the Metoba river, the shop specializes in a simple dish known as dengaku (田楽). At its most basic, dengaku is tōfu or vegetables (usually eggplant) slathered in a sweet miso sauce and broiled until crisp-edged and caramelized. 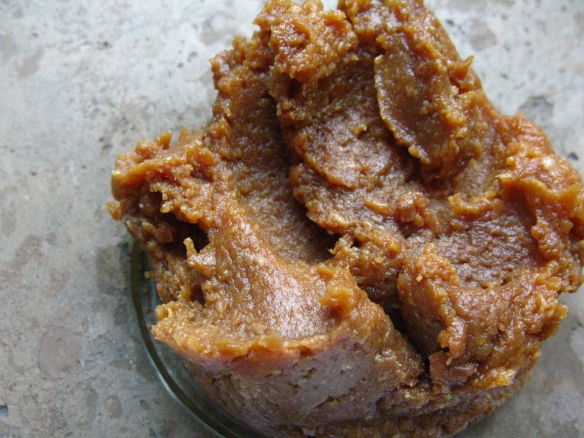 The menu at Dengaku Kiso-ya is minimal, consisting mainly of the aforementioned broiled tōfu, plus a few regional specialties such as iwana shio-yaki (salt-grilled river trout), basashi (horse meat sashimi – delicious, really!), and of course soba. The tōfu, cut into neat rectangles and threaded onto bamboo skewers, is springy and light, while the thick, salty sauce, lends a hint of depth and body. Five skewers cost a mere 400 yen, and eight will set you back only 150 yen more. The thing to order, though, is the dengaku teishoku, a set meal of tōfu dengaku, a vegetable side dish, rice, miso soup, and pickles. The side dishes rotate with the seasons and often consist of wild or foraged vegetables; in May, you might be served koshiabura in a sweet sesame dressing, while June might bring crisp stalks of fuki marinated in soy sauce and rice vinegar. If you’re lucky, there will be a sprig of peppery, tingly kinome (the tiny, edible leaves of the Japanese prickly ash) sitting atop your tōfu.

Translated literally, the characters in dengaku mean “rice field” and “comfort” or “ease;” taken together, they refer to outdoor festivals that date back to medieval Japan. Although the origins of dengaku likely derive from traditional songs performed during rice planting, they later evolved into more formalized festivals held for entertainment and in hope of an abundant harvest. What better way to send off summer and celebrate the season’s bounty, then, than with your own homemade dengaku feast? 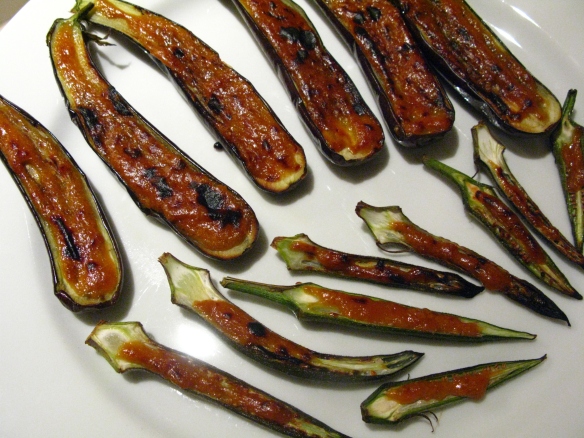 Incidentally, the miso I used for this recipe was made in Matsumoto by a friend of a friend. This type of miso, often referred to as Shinshū miso, is slightly sweet, slightly salty, and quite rustic. It’s perfect in this dish and is widely available at Japanese markets. (Look for the characters 信州 on the label.) You can also substitute other types of miso, but keep in mind that the seasonings may need to be adjusted. (White miso, for example, is much sweeter than red, so you will need less sugar.) Small Japanese eggplants, okra, peppers, and zucchini all work beautifully here. If you’d like to use tōfu, the firm momen variety works better for this dish. Before using, wrap the tōfu in a kitchen towel and weigh down with a few plates until the excess water has drained off, then thread onto skewers.

Dashi or water, as needed

Assorted late summer vegetables such as eggplant, okra, peppers, and zucchini. (Cut eggplant and okra lengthwise. Peppers can be cut into large squares or rectangles, and zucchini should be cut lengthwise into approximately 1/4-inch slices.)

Vegetable or canola oil, for coating

In a small bowl, whisk together the miso, sake, mirin, sugar, and egg yolks. Place over a pan of simmering water and cook over medium-low heat, stirring constantly, until slightly thickened. Remove from heat and let cool. The sauce should be thick enough to coat the back of a spoon, but not gloopy. If necessary, whisk in a little dashi or water to thin the sauce. Season the sauce with a little freshly grated ginger and/or shichimi, if desired.

Preheat broiler to high. Brush the vegetables lightly with oil and arrange in a single layer on baking sheets, cut side up. (Eggplant, peppers, and zucchini should be pre-cooked, but okra needn’t be.) Briefly broil the eggplant, peppers, and zucchini, until slightly softened and browned. Brush all the vegetables with sauce and place under the broiler for a minute or so, just until the sauce begins to bubble and brown in spots. It can go from caramelized to burnt in seconds, due to the high sugar content, so keep a close eye on it!