Nagano prefecture is known throughout Japan for its buckwheat, which finds its way into much of the region’s cuisine, from the famed Shinshū soba (more on which here, here, and here) to soba manju (sweet red bean paste wrapped in a thin buckwheat skin) and soba cha, a mellow, caffeine-free tea made from buckwheat kernels. The buckwheat harvest, which takes place in the late fall after October’s rice harvest, is hard and laborious work. Preparing the buckwheat for cooking is no easier: after harvesting, the buckwheat grains are threshed and sorted. Traditionally, stone mills are used to grind the grains into flour. Freshly milled buckwheat flour has the most delicate flavor, and so soba made immediately after the fall harvest is held in high regard.

(The images above depict traditional Japanese methods of buckwheat harvest and preparation. Full disclosure: they are photos of photos (not my own) from a display outside the Matsumoto tourist information center.)

Perhaps my favorite use of buckwheat (besides soba, of course) are the savory dumplings known as oyaki (おやき/ お焼き). These handmade portable treats, stuffed with cooked vegetables and other seasonings, are central Japan’s answer to the more familiar rice-based onigiri and omusubi. (In Hokkaido, the word oyaki actually refers to a sweet, bean-filled dumpling akin to dorayaki. These are entirely different from Nagano-style oyaki, as proud Hokkaidoans will tell you, should you ever confuse the two.) In Nagano, common oyaki fillings include mashed kabocha squash, spicy seasoned nozawana (a mustardy green), and the aforementioned eggplant-miso mixture. Sweet red beans are sometimes used as an oyaki filling, a tasty marriage of savory and sweet that makes an interesting pairing with afternoon tea. Although frozen oyaki are a favorite omiyage (souvenir) available at train stations throughout the prefecture, these mass-produced versions pale in comparison to the crusty, handmade treats available at countryside shops.

Two summers ago, I had the pleasure of tasting one of these oyaki at a roadside bakery called Bunga in a tiny town called Ikeda, about 15 miles north of Matsumoto. Bunga’s breads, baked in a wood-fired oven just outside the shop, were a far cry from the fluffy rolls and pastries available at most Japanese bakeries. Likewise, Bunga’s take on oyaki was a welcome departure from the more common, somewhat squishy steamed variety: their crusty, chewy exteriors gave way to succulent chunks of miso-glazed eggplant, a wonderful contrast in textures. We enjoyed an assortment of oyaki on the bakery’s shaded back porch alongside blueberry pastries and glasses of ice-cold barley tea. Henceforth, these became my platonic ideal of oyaki: hearty, deeply savory, and unabashedly rustic.

As a newcomer to Japan, I found oyaki’s rustic qualities both unexpected and endearing. Although I was as familiar with delicate soups and sushi as with dumplings and hot pots, oyaki represented an almost radical break from Japanese cuisine’s more refined flavors and textures. With their emphasis on frugality and seasonality, oyaki epitomize everything that is best about Japanese home cooking: they are practical but not precious, hearty yet healthy. Best of all, oyaki are as fun to make as they are to eat: the possibilities for fillings are endless, and the forgiving dough requires no rising time. Once cooked, the sturdy dumplings can be tucked into a bento box for lunch (or a picnic, for those of you in warmer climes), or simply enjoyed as a snack with a cup of hot tea. Thankfully, oyaki will always be delicious, regardless of how (or where) you choose to enjoy them.

After a few rounds of trial and error, I’ve settled upon my own recipe for oyaki. Although these don’t come close to the gloriously crusty texture of Bunga’s version, they toe the line between steamed and grilled quite nicely: crispy on the outside, with pleasingly soft interiors. Feel free to make any of the fillings included below, or devise your own recipe using whatever produce you have on hand. Sauteed mushrooms, caramelized onions or leeks, mashed sweet potatoes, and sauteed kale would all yield interesting and equally delicious results.

To make the oyaki dough:
In a large bowl, mix together all-purpose and buckwheat flours, baking powder, salt, and sugar. Make an indentation in the middle, pour in water, and mix well with chopsticks or a wooden spoon.

When the dry ingredients are moist, turn out onto a lightly floured work surface and knead until a smooth dough forms. Form into a ball, cover with a kitchen towel, and let rest at room temperature for at least 30 minutes before proceeding.

While the dough rests, make the fillings. (See recipes below.)

Place about 2 tablespoons of the desired filling in the center of each piece of dough.

Close the oyaki by bringing the dough up over the top of the filling, pinching at the top to seal. Use your hands to gently form each oyaki into a slightly flat ball, about 3 inches in diameter. 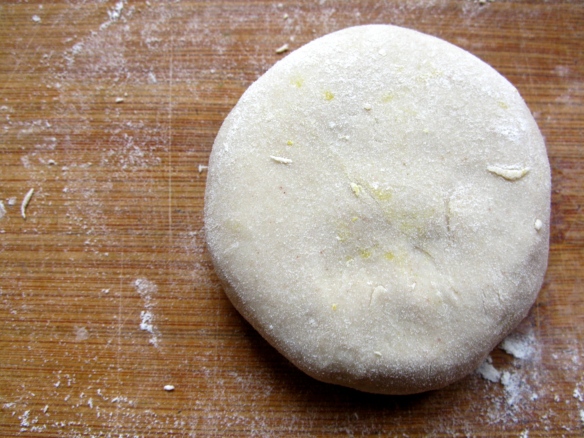 Heat a cast-iron skillet (or a heavy stainless steel sauté pan) over medium heat. Lightly grease with canola oil and place half the oyaki in the pan, seam side up. Cook until browned and crisp, then flip and continue cooking until browned and crisp on the other side. Keep in mind that the sides of the oyaki will take longer to cook than the tops and bottoms, so you may need to keep them in the pan longer than seems necessary. (If the tops and bottoms become too brown, simply lower the heat and continue cooking.) When cooked, keep warm in an oven and repeat with the remaining oyaki. 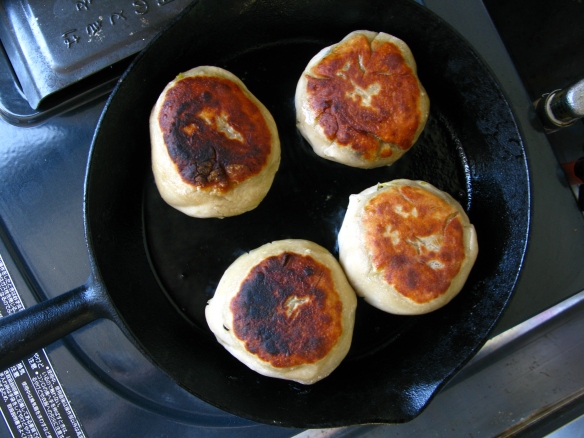 Scrape out seeds from squash and steam until flesh is easily pierced with the tip of a knife. (Alternatively, cut squash into chunks and place in a microwave-safe bowl with a few tablespoons of water. Cover with a paper towel and microwave on high for 5 minutes, or until very tender.)

When squash is cooked, scoop out flesh and crush roughly with a fork while hot. If the squash is dry and crumbly, add a little more water until it holds together. Stir in miso, sesame seeds, sugar, salt, and walnuts, if using.

*If kabocha is unavailable, substitute buttercup or Hokkaido (aka red kuri) squash, which are similar in texture and flavor. You can also use butternut squash, although its texture is wetter and its flavor less sweet. 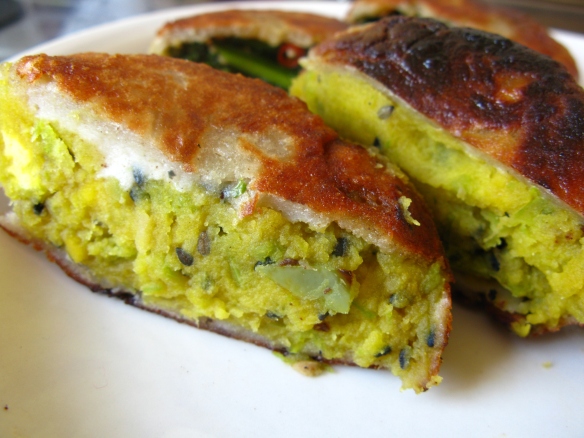 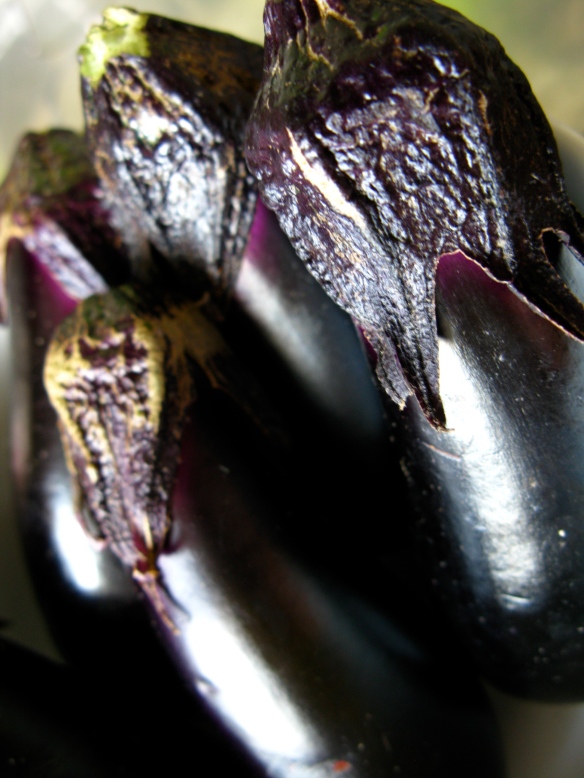 Heat the canola oil in a sauté pan over high heat and add the eggplant. Stir-fry until beginning to soften, then add the garlic chives. When the eggplant is cooked through and golden, add the seasonings and stir well to incorporate. Place in a bowl and let cool.

Nozawana, a Japanese green related to turnip, is traditionally used to fill oyaki, and the pickled greens are also a well-known specialty of Nagano prefecture. Fresh nozawana can be difficult to find outside Japan, so feel free to use your favorite assortment of bitter greens for this recipe.

Heat the sesame oil over medium-high heat and add the greens. Stir-fry briefly, then add the sake, mirin, shoyu, and sugar and continue cooking until liquid is almost evaporated. (If the mixture is dry, add a little water.) Stir in the sesame seeds and chili and season with salt to taste. Place in a bowl and let cool.